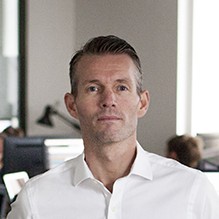 Dennis Mortensen is a serial entrepreneur, despite his best efforts to avoid it; seemingly ingrained in his blood, Dennis comes from a lineage of business owners and seeing their painstaking efforts while growing up, originally hoped to avoid that path. However, when his plan to pay off college debt went awry, his instincts lead him on an entrepreneurial course which has been his trajectory since. In those early days, after several successful sales and exits, his strategy was bold: doubling down on his successes with each new endeavor and angel investing the next. Ultimately he hit his first bust, a venture he’s since coined his “very expensive MBA,” which left him with 4 tickets to the caribbean and some soul searching. Over red bulls, a staple of his daily diet, Dennis tells us how he got up after his fall, still unable to shake his entrepreneurial drive, the successes he’s seen since by focusing on a single thru line; focusing heavily on analytics and inching closer to digital intelligence and automation. This is a system he’s closest to today as founder and CEO of x.ai, an artificial intelligence startup committed to solving the problem of calendar management once and for all, or as he puts it, “we schedule meetings.”