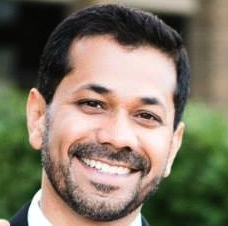 Growing up, every kid wants to be an astronaut. For Inder Singh it wasn’t just a dream: he “did everything in [his] power to get there.” He threw himself into the field starting with attending Space Academy as a kid, learning to fly a plane at 16, and finally working at major rocket labs while studying engineering at the University of Michigan (which he was compelled to attend because their symbol flies on the moon). This full-speed ambition, along with a drive to constantly be learning from the best and the brightest is a theme throughout Inder’s life and has produced a dizzying number of accolades: the founding of a successful nonprofit, 3 master’s degrees between MIT and Harvard, and public praise from Bill Clinton for his work in bringing more affordable malaria treatments to the third world, just to name a few (though his mom still wanted him to follow in his family’s footsteps and become a doctor).

His latest venture, Kinsa, looks to combine his extensive background to revolutionize how the spread of infectious diseases are tracked, starting with a simple device that every household has: a thermometer. In this episode, we sat with Inder to walk through his story and what he sees next on the global health tech horizon. While he may not be an astronaut or doctor, we think his mom is still pretty proud.

This episode’s Wodka tonics were provided by our friends at Alphabet City Wine Company.